the ability to be aware of energy;

< Emergence 4 > What we're here to do today though is to welcome the sense of energy, the ability to be aware of energy. It is an angelic sense, for lack of better words. It is an innate sense that you have, but it has not been used by you as a human for a long time because your human senses block it out. You think that what you see is real. There is a way of sensing energy, and it's going to be very difficult to explain it, so in just a moment we're going to just do it. Energy is neutral. It's all neutral. It has no force to it. We've talked about this a thousand times. It has no power to it. It does not have a bias. It is not negative or positive. It is just there. It's neutral. Energy is there because of consciousness. It is kind of the consciousness's gift, the I Am's gift to itself.

< Emergence 4 > Energy, all energy, is already within you. There is nothing outside of you. That's a huge revelation for a lot of people, because they've lived their life assuming most energy is outside. I have been with some of you when you have sat at night, laid on your back and looked up at the stars and said, “That's a huge universe.” Actually, no, it's not. And none of it is outside of you. And then the mind and the eyes jump in and say, “But that's big. That's 40 billion light years away.” No, it's not. It absolutely is not. It's actually right here. Once you start understanding that, you start understanding the way energy is here to serve you, you'll stay on this planet as an embodied Master and just glide through, because energy is going to be working for you, not opposing you.

< Emergence 4 > You have many angelic senses. The sense of Unity, that allows you to see everything as a single picture, rather than fragments that it really is. The sense of Love, the sense of Compassion. These are the angelic senses that we've talked about. But I've waited till now to talk about your energy sense. You have the ability to sense energy, and it doesn't need to have a smell to it. It doesn't need to have a sound to it. And it doesn't go through the human mind. The mind could not possibly understand it. There's no qualia. There's no association. The mind would search for it, but it's like it tastes like chicken. And there's nothing there. 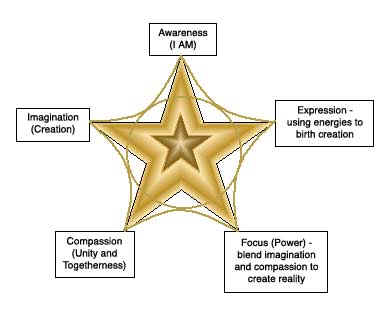 < Emergence 4 > Remember what I say about energy: It's the song of the soul. Energy, if you were to put any label on it, energy is simply communication, but a communication without song, without sound, without force. It's the soul's compassion and joy, coming back for the pleasure of the soul. That's all it is. And none of it is outside of you. None of it. It's all yours. As far as the eye can see in the day or the night, or small as you can perceive something to be through the human mind, it's all yours. It's just energy. It has been waiting and waiting to serve you. That's all. And how you have run from it. How you have avoided it. How you've been afraid of it. It's been waiting to serve you. The awareness of energy, the ability to be aware of energy in a nonphysical form without particles, atoms, molecules, waves, color, sound; the ability to be aware of the presence of energy is innate to your soul.

< Emergence 4 > Your eyes and your human senses have been perceiving energy as designs, as a telephone pole, as a stop sign, as an automobile, as a house. It's been perceiving energy designs. But that's not your relationship with energy, that's your perception of energy. You say, “But if this is all mine, how come I see a telephone pole and the person next to me sees a telephone pole?” It's because there's such a gravity on this planet of mass consciousness, an agreement that you're all going to perceive generally the same thing. But that is being shattered right now.